The word, “home” resonates with each of us in a particular way, depending on our upbringing, country of origin, and our sociological, psychological and/or physical experience of “home,” wrote curator Dr. Ginny Butera about the exhibition, HOME. 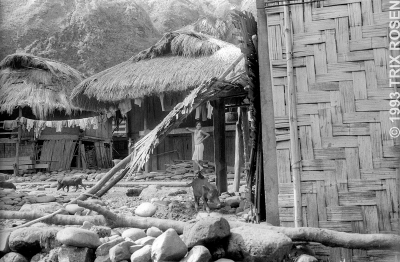 ‘Kalinga Vernacular Houses’ is an image from my documentary series ‘A Kalinga Journey through Time.’ For over a quarter of a century I have been photographing the dramatic transformation of an indigenous community set deep into the rice terraces of the northern Philippines. My work as a photojournalist initially brought me to the region. It was at the 1986 ‘peace talks’ between the new Aquino Government, the rebel soldiers and the tribal people where I first met a tribal woman who invited me to visit her village, Luplupa in Kalinga Province. It  could only be reached by walking a narrow bridge stretched high over the Chico River.

When I returned again in 2013, I saw that the last of these original one-room octagonal huts perched high on wooden posts have all been replaced by two-story concrete, multi-room houses.

I am drawn to photographing the timeless nature of historic architecture because the sites and structures are a repository of collective memories – a record of the builders and the people who once inhabited the spaces they held dear.

The curators for this show asked for the best work documenting the existing Pulaski Skyway structure and the best imaginative work using the Pulaski Skyway as inspiration or a point of departure.

This view of the Pulaski Skyway was observed during my daily walks with my dog in Leonard Gordon Park, Jersey City Heights. While standing on the highest hill in the park, I have been drawn to record the fleeting last rays of the summer sun as it isolates the Pulaski Skyway and lights it with a magical golden sheen. Five on my ‘Pulaski Skyway’ photographs that contrast the man-made landscape with the natural environment are represented in this exhibit.

My images record a biographical or historical moment, measured not as an isolated fragment of time, but revealing the narrative arc of my subject’s life, capturing past, recording present and projecting into the future. Whether an architectural site or a portrait, what haunts me is finding the essence of the visible and invisible timeline.

The portraits exhibited in SAME DIFFERENCE empower the viewer to question and challenge conventional definitions of gender and beauty.